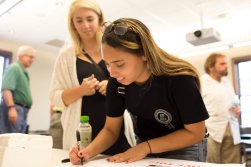 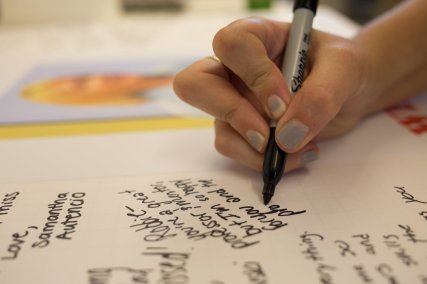 Robbie Gordon, an award-winning television producer who has taught journalism at Flagler College for the last five years or so, has announced her resignation. Students and faculty members gathered this week to wish her the best.
Gordon said she isn’t quitting journalism or television and has many projects in the works, including a PBS documentary about the untold history of St. Augustine. She is the writer and producer on the project.
Students at Flagler College have benefited from Gordon’s experience, which includes many years as an investigative producer for ABC News’ “Prime Time” and “20/20.”
The walls of Gordon’s office are decorated with just some of the more than 80 awards she has won over the years. The awards include the Alfred I. duPont-Columbia University Award, the George Foster Peabody Award, the Investigative Reporters and Editors’ Best of the Best award and many others.
“Thank you for being such a great mentor and teacher,” student Shelby Gardiner wrote on an oversized greeting card presented to Gordon at a reception.
“Thank you for being the reason I stayed at Flagler. The lessons you taught me I’ll carry with me forever,” wrote another student, Jamie Coulson. “Stay in touch!”
Gordon’s plans after Flagler College include enjoying country living and looking after the horses that she and her husband own.